Most studies show that a woman's sexual desire goes up just about the time her fertility starts to decline.  Don't believe me?  Well look it up yourself or just trust me.  I know what I'm talking about.  I'm up to my ass in medical journals and shit like that so if you don't believe me, then take a hike.

Men on the other hand experience a decline in testosterone and sex drive at just around the same time.  For some "men", the decline is even faster.  Put them in chastity and it's a nosedive.

Of course everyone is different. Some men in their 50's are as virile as ever.  Plus, their sexual experience and maturity make them very good lovers.

Some men in their 50's, especially those who've been locked up in chastity for several years don't have the same level of virility.

I'm not an expert in this area, nor am I a gynecologist, sexologist or anything like that.  I know just enough about it to be dangerous, or maybe even kind and loving.

Where am I going with this little rant? 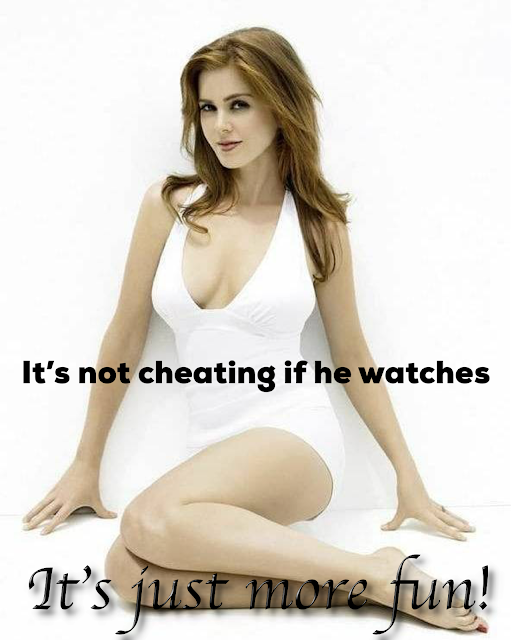 Needless to say a good time is being had by all.

Email ThisBlogThis!Share to TwitterShare to FacebookShare to Pinterest
Labels: Cuckolding

I wonder just how many couples used International Male Chastity Day as a starting point to "try out" the lifestyle and how many actually end up making it part of their lifestyle on either a permanent or semi-permanent basis.  In our case we had several failed "experiments" before both of us decided to  take it seriously.

I also wonder how many men would even try it out if they knew they'd be locked up six years later like my lovely hubwife is!

Here are a couple memes to enjoy on two of my favorite things....

Chastity - This one's pretty cool.  Kind of like requiring your employees to have either the Pfizer or Moderna COVID vaccines... 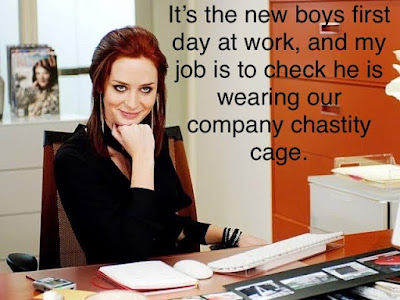 Cuckolding - Another sexy redhead for those of you with that preference.  Like the "chicken or the egg", I'm not sure what comes first, chastity or cuckolding.   Either way they can both work and both of them require some type of discussion ahead of time. 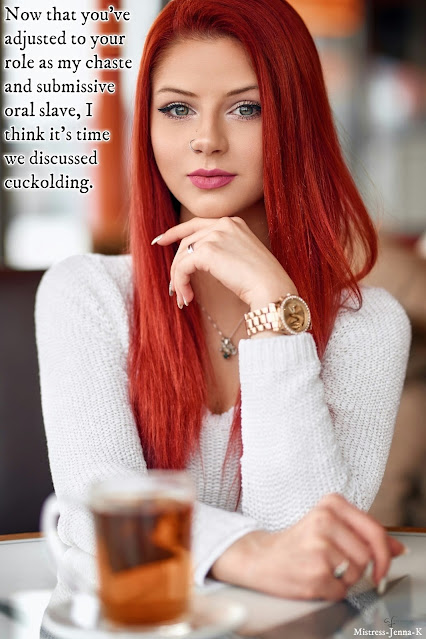 Have a great weekend.

Have a Nice Day

Wishing everyone who's either locked or holding a key for the one's locked a very happy and joyous International Chastity Day.

There are countless memes about chastity out there but I kind of liked this one. 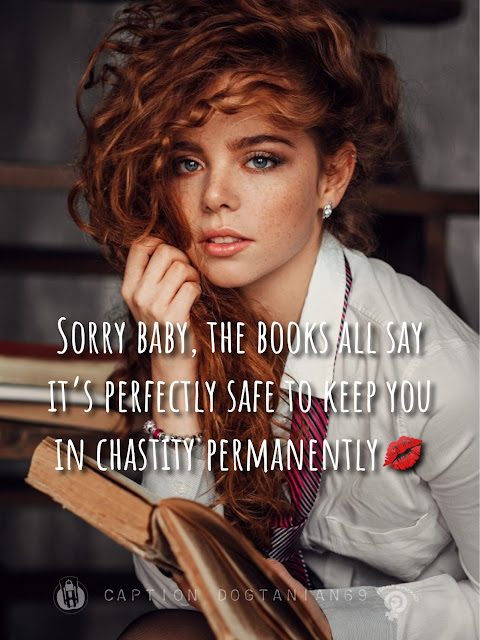 Not sure what "books" she's reading but permanent and long term chastity works great in MY book!

This meme would also be a fan favorite for those with a hot redhead for a keyholder ;-)

From The Mailbag - Jane says..

I received this several days ago but haven't had time to post it.  It's a followup to my "From the Mail Bag" post of December 20th in which "Jane" asks for some advice.  You can read the first post here.

I've corresponded very briefly with Jane since then and asked her to follow up with somewhat of a response to the comments that first post received.  I think Jane's made quite a bit of progress with John since that first post.

Here's Jane's letter in its entirety.

I must confess that since I felt guilty about seeking satisfaction for my own needs, until you pointed it out, I was not taking full advantage of John’s desire to submit to me and the freedom that allows me.I now see that as a feminine male, he craves my Dominance.

Most importantly, I have started to introduce the idea of my need to be penetrated by a capable cock. He is quite aware of the various reasons he cannot fit the bill, and so, on the few occasions when I allow him to worship me, I ask him if he believes that it is fair for me to go without. Of course, especially in the heat of his passion, he tells me that I deserve whatever pleasure I desire. Thanks to you, I am finally believing that!

Since he knows that he has an embarrassingly small penis (which we recently re-measured just for emphasis), and he knows his other failings like ejaculating prematurely–I believe he has accepted his limitations, and is accepting that my happiness lies beyond his capabilities..

Thank you so much for your guidance, Jane

As always your thoughts here are welcome.

Are you doing anything special next Thursday? 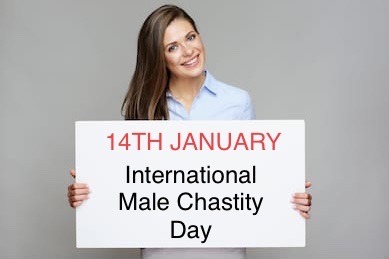 I've not made any special plans but we'll do something to commemorate the day.  On January 1 we celebrated six wonderful years of chastity.

If chastity is something you've thought about then why not plan on giving it a try starting next Thursday?

More couples are beginning to realize the benefits of the lifestyle.

Mistress K, one of my neighbors to the north,  recently made the decision that this was the year to give chastity a try.  I think it's a good decision and her sub hub in phoenix seems enthusiastic about it.  Read about it on their blog and drop them a note of encouragement.

Would love to hear from other practitioners of the lifestyle or those thinking about giving it a try.

Yes, I'm been very lazy over the holidays and not posting.  Just sitting on my fat ass, drinking egg nog and other adult beverages, eating Godiva chocolates and then some.  But I'm back if only to file a short and tiny end-of-year chastity report on behalf of my beautiful hubwife Terrie.

There were 8,784 hours in 2020.  The number of hours are important to both of us because she has to file a report on a daily basis indicating how many hours she was "in" and "out" of chastity, rounded to the nearest half hour.    Each day there's a calculated percentage of the time in, a monthly percentage and a year-to-date percentage.  If it sounds like a lot of work it really isn't.  The spreadsheets are all set up to do the calculations.

I'm rather pleased to report that Terrie spent 99.17% of the time locked in her Holy Trainer, or 8711.5 hours out of a possible 8,784.  Before you all start feeling sorry for her or think that I'm kind of sadist,  I do allow her out of the cage very briefly for "supervised" showers and don't count that time "against" her.

But at the end of the day, I don't measure the effectiveness of a chastity regimen isn't measured solely by how much or how little time one spends "locked up."  There are several other factors such as whether or not I'm getting the type of behavior I expect from her and is she sufficiently focused on the things I want her to be focused on.

I also keep track of how many orgasms she gets to enjoy.  This year Terrie had 7 orgasms.  Four of them occurred when she was out of her cage and the other three while locked.  The number itself isn't necessarily indicative of her behavior (good or bad) or my pleasure or displeasure.  It just is what it is.

Finding the optimal balance between pain/discipline and pleasure/reward or a submissive's "sweet spot" is something that's been pretty elusive for me.  I just go with the flow now. And seven is a nice lucky number anyway. 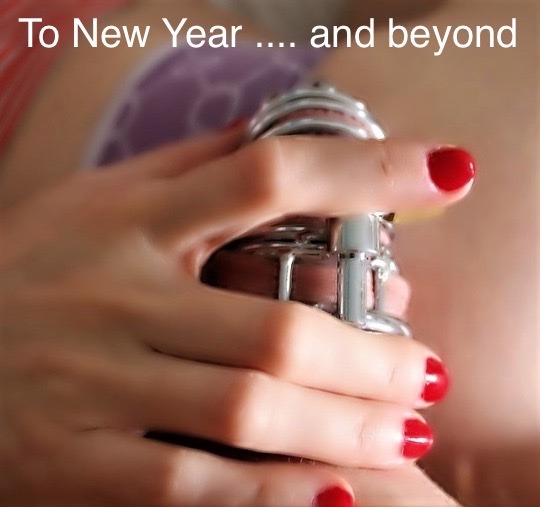 One more thing, I've corresponded a few times with "Jane", the woman I mentioned in my blog post "From the Mailbag" on December 20th.  She was very interested in some of your feedback and I've invited her to post here.  She's thinking it over.  I'm hoping she does but if not, I'll fill you in on her thoughts.

I thought I heard something downstairs real early this morning but was a little too lazy to go check it out.  I nudged hubwife and she tip toed down there in her babydolls and I nodded back off to sleep.

Well lo and behold, look what I found under the tree this morning... 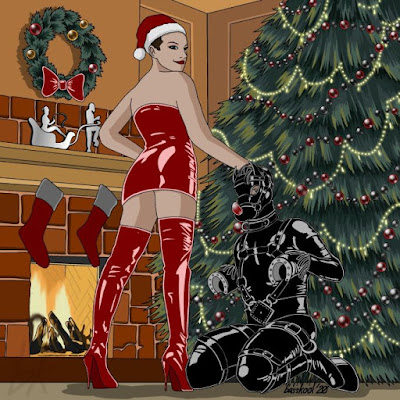 And my Christmas list had nothing about pony play!  Oh well, don't look a gift pony in the mouth.

Merry Christmas to all.  Stay safe, especially with your new kinky toys.

Click on the picture to visit MY Tumblr page